Over the festive period I visited a few places and caught up with a lot of friends, so I thought I would start off the new year by letting you know a bit about my holidays. All the ups and downs. This could be a long one...

The festivities started off with visiting the Meridian Shopping Centre in Havant for their evening of live Christmas music. There was a lovely range of music styles and festive songs. I realised theres so many Christmas songs that make me think of Home Alone, hahaha.

One afternoon, around 20 something of December, I sat with Charlotte in Southsea and we spoke about the new opportunities and plans Charlotte has for Urban Salt. We had a much longer than planned chat, it was lovely to meet and discuss our thoughts on blogging, influencers and marketing. While we were sat down I had noticed we were just across the road from LJR. So when we went our separate ways at about 3pm I walked over to get an afternoon snack and a drink.

The new Lord John Russell, which was formerly Little Johnny Russell's, from the outside looks very much the same, inside there has been more of a change. Everything seemed cleaner, brighter and newer. The evidence of the £170,000 revamp is clear to see.

I didn't see the new kitchen, but the new menu shows the standard and variety of food seems to have increased alongside the new facilities. However I was surprised when my food arrived not on a plate...

Its only when you look back and think, I have done a few things. So I also attended a Speed Dating evening at Spice Island in Old Portsmouth. As some of you will know I have been speed dating before, I think around 18 months ago.

I actually had a funny chat with Sophie about going a week before. I mentioned that I wasn't sure about attending because I am not really looking for a girlfriend at the moment, but it would be nice to go and meet people. Sophie's reply was ace! "ok big head, you may not get a girlfriend!". I laughed and it put me at ease again.

The event was nice, organised by Slow Dating and involved 15 four minute dates. There was a mixture of people there... yer... a mixture... But it was a nice evening.

On the 23rd I caught up with friends from school for a Birthday outing (Liam's 37 or something now, wink wink, hahaha). It was lovely to see people that no longer live in the area and/or work away much of the time. There was all the usual catch up talk, job changes, partner updates, baby talk, house improvements. Its funny how much you miss, must be all that Facebook advertising preventing me from knowing who's doing what.

It was also nice to talk about 'this stuff' as friends have become more aware in the last year that I write about my life online. Some where more receptive than others to the mention of mental health, but thats ok. 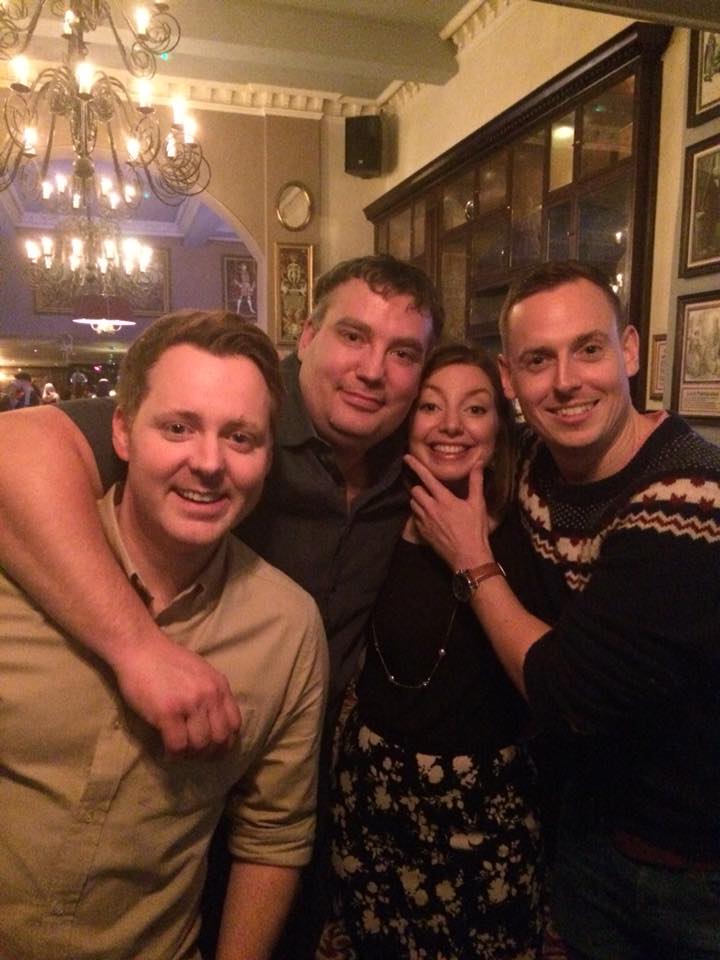 Our evening took us to Tiger Tiger in Gunwhalf. As I had expected this was very quite. The rumours I had heard about Pryzm taking most of their business seemed to be very true.

It was the Saturday before Christmas, one part of the venue the ‘club’ room was closed and all four separate areas of the venue were very quiet. Keep in mind, there used to be no room to move around the venue. That night I could have done a triple jump (if I had the ability). It’s honestly the quietest I’ve ever seen a club venue. All the more mystifying that it’s £10 entry. Given there is now a newer, cleaner, very slightly cheaper, more popular venue 2 miles away.

Next up on my festive week or so was Christmas Day. For the third year in a row I made my way to Bournemouth Beach. I do love Bournemouth. Unfortunately I just missed sunrise this year thanks to snoozing the alarm for 10 minutes and then not being able to find a working pay meter at the beach. However, the mass cloud meant that I hadn't missed much.

I took a few photos in the same spot as the last two years. Reflected on the change in my mental health and outlook in that time. I remember that first year and I think three times I started to walk towards the sea with the intention of just walking straight in and not coming back. I am, in myself, proud of the progress that I have made since then. I still struggle, but the struggle is not as vicious.

I made my way around to the Pier and walked to the end as I have done before. Again noticing the change. Instead to wanting to jump off the edge and disappear into nothingness, eaten by the sea. I stood, I listened to the waves, felt the wind hit my face and looked at the small red light.

In that moment, it wasn't danger or warning. It was seemingly almost festive...

Walking back along the beach I stopped to take some more photos. It is so lovely, and to be there before the sand is touched in most places is awesome. I watched the waves hit the breakers, as seagulls landed nearby. In the distance too, I could see surfers out to catch their Christmas Day waves.

Im not sure what I will do next year, but these 3 mornings have been so important to and for me.

The afternoon was spent at my sisters with close family. I loved seeing little Phoebe sat at her new makeup stand, doing eye shadow (with her eyes open, hahaha). Then next to her Layla putting on her shin pads and kicking a football around the room. They are so different.

It is nice to sit at a table with mum and dad, but still very strange to me. Theres been 20+ years of... non affection. So to see them sat at a table passing the Christmas dinner across the table is a bit of a mind fuck for me. But its is lovely that two people who did love each other can now be pleasant to each other, not 'for the kids' but because they are both in better places (IMO).

I spend Boxing Day evening at mums. She had invited a few people around. These 'family and friends' things are not my idea of fun at all. In fact its fair to say I usually actively avoid them. But its been a hard year for mum, so I wanted to help her have a nice ending to it. Plus I got to see Phoebe and Layla again.

Its been a mixture of feeling support and annoyance at some comments in the last few days. Some have congratulated and shown interest in my discussion of mental health and the work I hope to do in 2018. Unfortunately there is still a negative side (as there is to anything I guess), hearing suicide described as "selfish", self harm as "wrong", antidepressants as "happy pills" and more I'm sure. I do not feel strong enough to challenge all of these incorrect assumptions, but I hope to continue to tackle as much as possible.

As 2017 nears its end I finally went to a game of Ice Hockey! I have wanted to go for years, but its always off season or clashed with something or I just don't get around to looking. But thanks to Paul saying "lets go" I actually went. We saw Guildford vs Milton Keynes in Guildford.

It was so much fun. I did have to ask a few questions about the rules and confirm some of the plays. But I was largely able to understand the action. There was so much action, near fights, wall bashes, flying pucks and a final score of 7-2 Guildford.

Its been a very cool year, with ups and downs. I am excited and nervous for 2018. Theres a few things in the works that could/will make it an awesome year too.

Thank you to everyone that has supported me this year.

New Year I stayed in, I did still take a couple of photos. I hope you had a nice night, whatever you did. I wish you well for 2018.

Thinking with My Eyes Closed